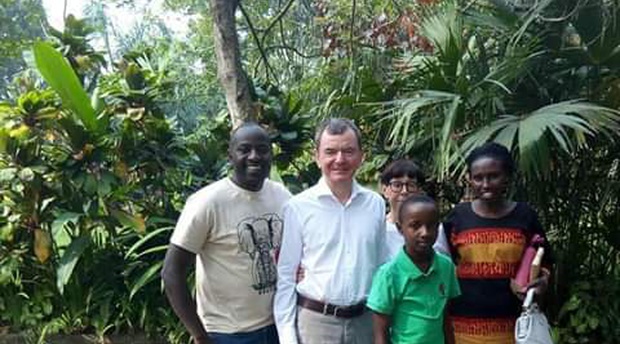 "We highly recommend Across Africa as a very competent and reliable travel agency and tour operator. Not only the trip itself was well planned and organised also it was a great pleasure to again travel with our guide Richard in a Land Cruiser through the country."

Written by Harald Bechmann (Germany),  February 2019 (referring to a safari in January 2019)

From January 5th to 20th 2019 we had two wonderful weeks travelling through Uganda’s Albertine Rift in the southwest of the country and thereafter into the northeast corner of the country. Our destination airport was Kigali and after one night in Ruanda’s capital we drove northwestwards to the Ugandan side of the Virunga’s where we had such great experiences like climbing Mount Gahinga and Golden Monkey Tracking. From there we drove to Lake Mutanda, the most beautiful Lake in the whole of Uganda, perhaps in Africa, with Chameleon Hill Lodge sitting on a ridge on the northern end of the lake. The view across the lake to the Virunga’s in the south is unforgettable.

Our next destinations have been the Bwindi Impenetrable National Park – the most beautiful tropical forest we ever saw, the northern part of Queen Elizabeth National Park with Kyambura Gorge and the Kazinga Channel connecting Lake George with Lake Edward and thereafter the Semliki Wildlife Reserve at the southern end of Lake Albert with its amazing number of bird species particularly the famous shoe bill. From there we had a two and a half to three hours flight to the Kidepo National Park in the north east corner of the country right in the triangle formed with the borders of Southern Sudan and Kenya. This park in its nativeness and virginity is one of the most beautiful savannah parks in Africa we ever saw.

We planned and booked the whole tour with Across Africa from Kampala and we again would like to take this opportunity to thank Doris Meixner and her team for the excellent job they did. It was already our 4th Uganda vacation we booked via Across Africa and it confirmed our good experiences from the first time. We highly recommend Across Africa as a very competent and reliable travel agency and tour operator. Not only the trip itself was well planned and organised also it was a great pleasure to again travel with our guide Richard in a Land Cruiser through the country.

Worth mentioning is finally the fact that Doris Meixner is not only the owner of Across Africa but also the owner of the Chameleon Hill Lodge. The lodge already mentioned is a total work of art with its different coloured cottages following one after the other starting from the main house on the very top of the ridge downwards, each with the same unforgettable view over Lake Mutanda to the Virunga’s.

We hope that we will have more opportunities in the future to visit this beautiful country again!